Downstream towards the O2

Traces of the old working Thames can still be seen beyond The Old Royal Naval College downstream to the giant Victorian power station and beyond to the Georgian terrace of Ballast Quay. 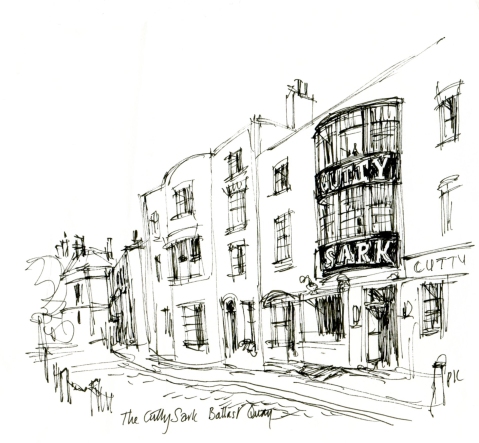 One by one working wharves, cranes and all equipment have been swept away ready for redevelopment. The East Greenwich Peninsula was once an industrial hub. Do you remember the cluster of giant grain silos and the magnificent cranes along Lovell’s Wharf serving the once busy waterfront where lighters and coasters plied their trade? 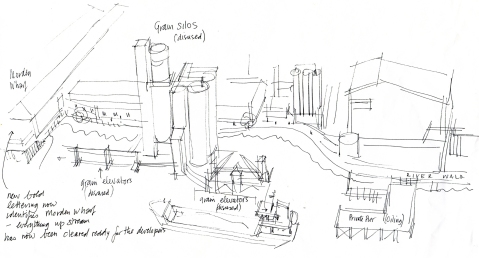 However the last working wharf at Victoria Deep still attracts impressive aggregate ships, and a fleet of tugs and lighters transfer their cargos to up river wharves. From my studio I keep a friendly eye on arrivals and departures, which are reliant on the right state of the tide to make a move. I am much impressed how fast the self off loading gear can empty a ship and how quickly mountains of stone clippings can grow – interestingly these change to a darker shade of grey when rained upon.

Back to the river and shoreline – it’s become noticeable that the combination of a stronger tide/current together with the multi hulled Thames Clippers mean that dramatic changes are happening to the river bed at low tide levels up towards the embankments or river walls. The scouring effect of the double wash from the fast moving craft is exposing long forgotten structures and wreckage. One must remember that their excellent service up to town has been extended to a rush hour service between Blackfriars and Putney – so more traffic. This new service utilises the ‘old river bus craft’  which haven’t the same glamour as the two types of fast ferry. These Australian craft were, surprise surprise, banned from operating in Sydney Harbour for the very same reason as my moan… – the remainder of the fleet are in Bangkok!

The Thames Clipper depot is at Trinity Buoy Wharf just opposite the O2 – the Putney service starts in the early hours from here in order to catch the early birds in the upper reaches – which reminds me that Canada Geese have adopted our beach as a nursery , which is a welcome sight as we watch the families progress, reliant on tides to fulfil their sleeping pattern – all huddled together as the foreshore becomes available when the tide drops away – more of this anon!!