Woken by a foghorn from the commuter ferry we realised that the long Bank Holiday was over and Londoners were on their way back to work.  What  a glorious Greenwich weekend was enjoyed by the hundreds of visitors that thronged the waterfront.  Autumn was on the way as early morning mists hung to the high ground on the A2/M2.  Watling Street – the Roman road to the coast – has long been by-passed by a four-lane highway.  Bound for Faversham is now the easiest hour’s journey as it by-passes the linear sprawl which generated the tail to tail traffic of yesteryear.

Glimpses of the Thames or Medway are rare as the wooded , hilly downland obscures the much-used motorway, which clings to the high ground.  Breaks in the early morning fog suddenly reveal silver aircraft heading for City Airport.  Glimpses of the harvested fields ablaze with August sunlight as the Eurostar, fresh from the Gare du Nord, spans its lofty Medway crossing.

Our Faversham turn off crosses the old A2 where there are signs of the travellers of old – a hospice here and a chapel there, no doubt on the pilgrim trail.

Crossing the last wooded bluff, still long used for coppicing for fences, opening up vistas across the Luddenham marshes where orchard and pastures flourish close to the Swale – this tidal waterway between Sheppey no longer used by coastal mercantile vessels, just the occasional yacht or even a Thames spritsail barge

As reported a month or so ago, our cottage neighbours Julia and Peter Philips have taken to life on board Daffodil – having crossed the Estuary and cruised the Deben, Stour and Orwell, are now up the Blackwater and settled into the Chelmer Canal, where a comfortable setting could provide an overwinter mooring.  Having endured a few dramas with engine loss and anchor fouling, they have realised that the quiet boatie life is for them.  Lets hope they will repair to our neighbouring cottage during the harsh winter season.

A spin into the neighbouring countryside always delights – the lane which follows the marshes down to Teynham took us through fruit-laden orchards – all now dwarf trees, so easy to pick.  The hamlet, with its splendid pub, was a grandstand to see the house martins rehears for their great flight south.  Neighbouring bird sanctuaries were jam-packed with every type of wader imaginable as suddenly they took off into the air and wheeled round and round, gaining height in preparation for the word go.  Even the humble but perky starlings joined the fun and rehearsed their amazing swirls of tight formation.

Back in Greenwich, the first of the inbound longhaul jets rumble over the capital, Heathrow bound.  As dawn creeps in, the wake of some passing boat breaks upon the neap tide shore line.  Awake early with the promise of a NADFAS outing to the Sussex downs, it gives me time to pen the drama of last night’s flotilla.

The first of the Dutch tall ships sailed up on the evening tide – the first of a series of short voyages planned from Woolwich upstream towards the Pool of London.  A little later on as dusk fell, two small tugs towing a lighter crammed full of fireworks moors up along the PLA barge just opposite the Trafalgar Tavern.  The Harbour Master’s launch then turned up to oversee the arrangements for the promised firework display.  One by one, the flotilla of five or so ketches slide up the darkening channel, their top gallants floodlit to add to the drama.  When the fleet is fully marshalled, all hell breaks out as rockets bang off to start the 20-minute or so display.  No doubt the media make sure the concept is panning out as planned.  Small figures dart about on board the display launchpad as clouds of bonfire smoke drifts lazily over the fleet as they sail graefully by.  By chance the bright green laser light marking the prime meridian projected from the Royal Observatory adds a touch of science fiction – as do the usual fast ferries charging through the fleet with flashing lights and an extra bright headlight or two.  Alas, the regulars don’t care for incoming Johnny Foreigners mucking up their trading routes!!  Times don’t change. 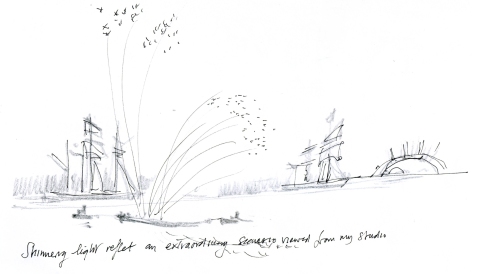 The next day I was called out to the press day down at Woolwich Arsenal Pier.  I was invited to board Iris of Rotterdam to launch the news that Greenwich and Falmouth will play hosts in next year’s Tall Ship Event in the UK.  Meeting the Falmouth team was useful as the fleet will gather there and sail around the South Coast to a Greenwich Finale.

The Thames has awaited many a year to welcome the fleet – the exact venue and nature of the event is still formulating.  Over the years I have been to Newcastle and Cherbourg and smaller events in Bristol, The Clyde, Portsmouth and Amsterdam.  The atmosphere is fantastic and the Royal Borough of Greenwich together with Falmouth are both courageous to facilitate such a gathering.  Bravo!!

One response to “Tall stories”