The architectural glories of Greenwich are best seen on a sparkling Autumn day, with a brisk breeze and a flooding tide where Father Thames plays his majestic changing role, incoming tugs and barges having the right of way.

From my studio window the glories of Wren’s domes are revealed once more after the splendour of the great avenue of trees is receiving its bi-annual trim.  The aerobatic arberologists swing from one purchase to another skilfully trimming each necessary branch still bearing their golden hue as they tumble into the College grounds, exposing its magnificent facades to one and all.

Alas, this secret view is about to be lost as, yet again, the town is losing its humble beginnings of riverside fishing port inheritance bestalled by Wren’s great naval college, which replaced the Palace of Placentia.

I write with some imagination as this very view in which I rejoice overlooked Henry VIII’s Royal Chapel, which later became John Evelyn Clerk of Works office.

The essential crane as seen in Canaletto’s panorama was where the measured blocks of Portland Stone were unloaded from the sturdy craft which had sailed through seasonal storms up the English Channel into the haven of the Thames Estuary. 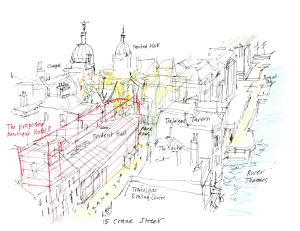 The planning application for a 90-bed hotel has been submitted to replace the disused Trident Hall with its front façade  impinging into the architectural scene I have sketched.  Its lofty façade down Crane Street will suddenly remove the humble essence of this unique pedestrian way, which both tourists and residents respect for what it is.  Do, please, raise your voice to Mark Mirams at the planners re. their file no. 13/2791/F at 020 8921 6097.

Perhaps the planners should realise what a historic site this is.  ‘Greenwich Revealed’, just published this week by Neil Rhind and Julian Watson – both historians of some renown – is a learned investigation on 18th Century Greenwich.  Julian Watson: 08690 0680.