Looking after the young and the old!!

The welcome return of ‘Massey Shaw’ to London was a memorable occasion for London’s firemen as their old and trusty historic  ‘fire float’ returned to the capital after a major refit down west at the Neilson shipyard in Gloucester.

Originally based at Blackfriars Bridge she played a noble role during the Blitz providing essential ‘fire power’ in quenching the riverside warehouse conflagrations.  Not only that, she also went to sea for the first time going to Dunkerque to aid the French brigades dealing with their blitz and was ‘called up’ to help with the general evacuation of our defeated armies, saving hundreds of troops from capture.  Built in 1935 at JS Whites yard at Cowes, she found a retirement home at Greenwich’s Wood Wharf where Pope and Bonds expertise and slipway provided the necessary day to day maintenance.

Alas, she suffered extensive damage from our local louts who even managed to open the sea cocks.  A gallant group managed  to raise enough funds to match a Heritage Award.  After two years in dry dock in the West Country, she came home by road on a low loader prior to going on to being exhibited in January’s Boat show at Excel. 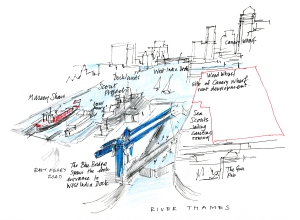 The Docklands Scout Unit made her welcome alongside the West India Dock H.Q. adjacent to the Blue Bridge and the West India Dock gates.  Last weekend I arranged a family outing to greet her on her recent arrival, rewarding them with a treat at the American Diner, relocated from Covent Garden to a Lightship quayside location at nearby Trinity Buoy Wharf – well worth a visit!

Just across Leamouth, a tug was manoeuvring a large lighter being loaded with tunnel spoil.  The large dollops of mud which fell off the conveyor belt caused much amusement to both children.  Their granddad bored them with Crossrail Tunnel talk about a future train link which could well take them to meet their aunt living in Maidenhead all the way from Canary Wharf at speed and without changing trains which would make our Boxing Day trip much easier!

The Dockland Scout Project at West India Dock provides youngsters with canoe and sailing opportunities from their base near the Blue Bridge.  The adjacent lock gives them easy access on to the river Thames.  Enterprising scout canoeists have explored the upper reaches and have even camped at the source of the river, having navigated through the reeded shallow stream at the head which is set in the rolling Gloucestershire borderland beyond Lechlade, some 140 miles upstream from the Isle of Dogs.  Sounds an ideal venture for Docklanders – oh to be young again!