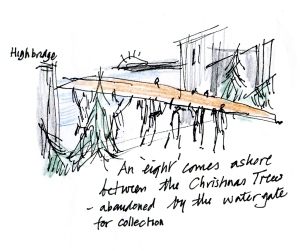 Now, well into the New Year with all the celebrations concluded, the 12th Night clear-up is in full swing.  The river is in full spate as flood waters from the upper reaches race past.  The juggling of the Barrier closures when spring tides meet this extraordinary torrent exacerbated by street run-off from the acres of hard standing which is being extended by even more riverside development sites.

One of our new year highlights used to be played out in front of our old home in Diamond Terrace.  It was the custom for neighbours to congregate to listen to the extraordinary outburst of ship sirens when dockland used to be crammed with merchant men from every corner of the globe.  The occasional firing of ships’ distress flares added to the drama.  Auld Lang Syne added eerily to our jollifications as David Matheson swirled his bagpipes along the terrace.  John Masefield, the poet who once lived at No. 1, would have been more than moved, even though he wasn’t  too happy living in Greenwich.  This coming summer, the promised arrival of the tall ship fleet participating in the Royal Greenwich Tall Ships Regatta this September, would have excited him,  as it does me.  A five-day festival from September 5th-9th will be centred at Woolwich Arsenal Pier which has attracted a Dutch flotilla over the last two years. 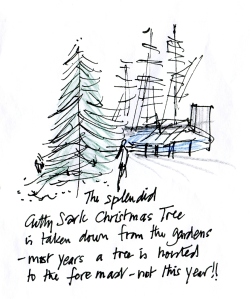 The street decorations around Greenwich Town Centre and in the market were much admired, as was the clear up – well done to the town centre team.  The beautiful, lit up tree in Cutty Sark Gardens was echoed by a similar illuminated ‘brother’ in Island Gardens.  It’s strange how the art of decorating construction cranes is no longer in vogue – however, the brilliant red hazard lights are clearly seen along the course of Thames side construction sites.  We missed their activity during the winter break as many of the workers rushed back to their loved ones overseas.

Early January is a good time to take stock of the major development sites and to report to you from my ‘Crane’ Street eirie many of the long term schemes that can now be viewed as the scaffolding cones down to reveal all. 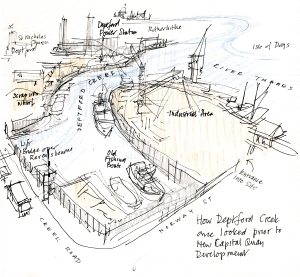 Perhaps the most dramatic is the strangely named New Capital Quay, which occupies a once-industrial peninsula formed by the Ravensbourne as it enters the river at Deptford Creek, once a jumble of working wharves and slipways, now home to a block of apartments, many 10 storeys high.  The saucy, silver-clad Admiral’s Tower – 13 storeys high – looks more like one of the giant cruise ships which moor close by at ‘Welcome’ (the PLA’s floating customs hall).  The deep water mooring has for years attracted some of the largest vessels afloat – even aircraft carriers – though too shallow for the monster carriers now under construction. 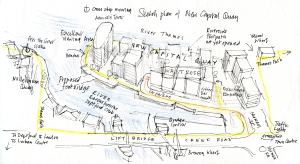 The view from the riverside promenade is well worth a visit as it gives a completely new lookout point both up the creek and across to the curious sculptural representation of Peter the Great and his dwarf attendant.  Closer inspection can be made via the giant lift bridge still used daily to permit coaster access to Brewery Wharf – the last working wharf on this once busy mile-long creek.  The Laban Centre is the first of many creek side sites to be redeveloped.  BPTW have left their Norman Road HQ, while the surround quay is being worked on.

The next time you visit Waitrose’s impressive store in this ‘new waterside village’, arm yourselves with a take-away coffee and, from the creek head benches, muse about this historic spot – the home of the once famous fishing fleet, a Viking harbour, a centre of shipbuilding and where Trinity House was founded just by St. Nicholas Church.  Even better, come and see my exhibition celebrating their Quincentenary at Tony Othen’s Greenwich Gallery in Royal Hill – open until 29th January.  Look back to my blog of May 4th last year!!