Anxious calls come from family and friends who phone up to see how we are faring with the threat of flooding with the extra high tides and thrashing winds. Surprisingly, as old hands, we reply to remind the concerned ones that the good old barrier has rotated into action yet again to keep the threat at bay – the prevailing strong westerly’s provide iconic spume blowing over the incoming unrestrained tides far too fast for me to draw!!

River living is so threatened as the scenarios of the passing time change and the sudden crashing of waves against the river wall by day or night spell out nature’s time table. The flow of river traffic reassures me of normality but the rigid time tabling of tug drawn barges riding the tides however is often curtailed by barrier closure.

Chris Livett who graciously opened my recent exhibition revealed how running a responsible ‘take  away service’ for civil engineering contractors who require their tunnelling spoil to be removed from their confined sites can be snookered by rough weather. At night the tell navigational lights of tug-towed barges can just be seen against the dazzle of the Canary Wharf 24hr business complex – the throb of the mighty tugs adding to the drama.

Livett’s Launches with a base just by Butlers Wharf run a diverse waterborne business which grew from a humble hut on Greenwich Pier. A quick visit to their offices at Eagle Wharf shows how it is thronged with activity controlling their fleet of Mississippi style sternwheelers to mighty tugs and barges. Chris, being one of the Queen’s watermen, was a key player in the Thames Diamond Jubilee Pageant. He is also a past master of The Worshipful Company of Waterman and Lightermen.

Back to the roof tops again – this time a study of 18th century Greenwich as revealed by noted local historians Neil Rhind and Julian Watson.

An architectural set of elevational details of early 18th century Greenwich which were discovered in Wilton House archives – thought to be surveyed and delineated by Hawksmoor’s apprentice. The landscape formatted booklet depicts properties in East and West Greenwich – the originals depict the street scene in simple diagrammatic form providing a fascinating task to identify their location in today’s scenario. 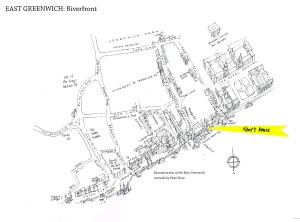 I was set the task to identify and illustrate them in aerial sketch form to help the reader understand the coverage of the study. The 40 page booklet is easy to read and generously illustrated with Julian’s photographs.

As you can imagine I was fascinated by such a project trying to match up the elevations with the present townscape especially the humble waterfront wharves and quays compared to the grandeur of Wren’s Greenwich Hospital at the heart of the matter. 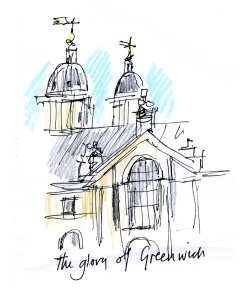 ‘Greenwich Revealed’ is on sale in the Warwick Leadlay Gallery in Nelson Arcade, SE10, Sabo Newsagents in Stockwell St and in Naval & Maritime Books in Royal Hill. Alternatively, email Julian Watson at member@100embleton.fsnet.co.uk and he can supply.

The Boat Show has come and gone – sturdy sailors headed downstream on their way to their home port – members of the ‘Round Britain’ cruise team amongst them – yachties often camp out in London’s many marinas to save on hotel expenses – camaraderie abounds – memories of Earl’s Court Guinness pavilion come flooding back. The Excel venue also attracts historic craft which can berth alongside in the Royal Docks venue.

The moorings are usually laid down before Christmas – the worthy craftsmen who fixed our viewing deck get this job. Based in West London on Eel Pie Island they have to plan with precision to get their floating crane and tug in position on the right day – on their way back we are lucky to get a friendly toot – let’s hope the recent wild weather hasn’t been a problem.