The dramas of living by the Thames have been heightened by the powerful gales.  A gust down Crane Street bowled me over while taking emergency action over our doorside bay tree, moving in its rotting tub, which required instant trimming just like the sails of a boat.  Two lads from the Yacht pub sped to yank me onto my pins again.  A muttering missus snipped at the culinary branches for drying out while I retreated with a mug of tea to contemplate my street-soiled trousers and check to see if my writing capability was still intact.  So here I am, back in action, bathing in glorious sunshine and thankful that I am not up at A&E!

I reported on last weekend’s drama and the amazing speed which rescue craft arrived at the drama scene, so here’s a diagrammatic map to show where they are based.  Travel times can only be guessed according the winds and tides. 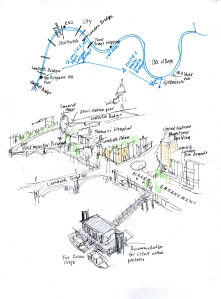 The river police are based at Wapping where they have their own pier and boat house.  They operate throughout London. 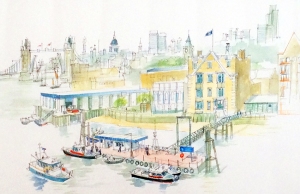 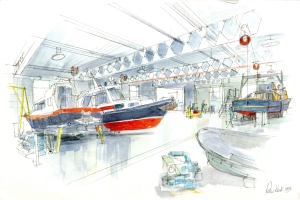 The RNLI base is beneath Waterloo Bridge and the Fire Rescue services at Lambeth.  The PLA work from various piers but their main depot is at Denton Wharf just downstream from Gravesend.  As I write, a Harbour Master catamaran launch passes by on its regular patrols on the tideway from Richmond down to Gravesend.  Yet another squall darkens my studio creating dramatic lighting effects on the towers of Canary Wharf and on the twin domes of the Royal Naval College, now fully exposed by the harsh cropping of the Plane trees – just in time, methinks.

The proposed Cruise Ship Terminal just of Tunnel Avenue is showing signs of the builders’ preliminary workings.  Site huts have been erected and alongside an ex-British Railway carriage has appeared, not dissimilar to the buffer car carriage next to Deptford Station.  Likewise, site huts and pile  drivers are to be seen a little further downstream where three large buildings are under way.

Curiously, the purpose-built slipway and office structure next to Victoria Deep water has been waiting for its proposed occupier to move from the old Pipers Wharf with its floating dock and ship repair yard, awaiting the extension of Lovells Wharf Housing development.