A great feast was held at the Fishmongers’ Hall, itself a remarkable Livery Hall,
for the Fishmongers’ Company.  This time it was the venue for the quincentenial dinner of the Company of Watermen and Lightermen.  The Princess Royal was the principle guest with other worthies such as Admiral of the Fleet Lord West, Lord Stirling of Plaistow, Richard Everett – the retiring chief executive of the Port of London.

I was summoned to prepare a commemorative drawing of the great event;  so, tucked away out of sight on a strategic balcony, I was able to view the general feasting while sketching away.  Based with these essentials, I am then able to prepare a suitable coloured drawing to record the event.

Similar to the role of a press photographer, I could roam between the guests’ arrival with the traditional escort of Doggetts Coat & Badge men in their splendid scarlet uniforms armed with a ceremonial oar. It was interesting to see a wide age group of gentlemen of the river with their ladies, convened in such a traditional manner.  I was delighted to see many acquaintances who busy themselves on the tideway, and hopefully Chris Livett will be pleased with the end results as he initiated the commission. .  He had kindly officially opened my new year exhibition at The Greenwich Gallery highlighting Trinity House’s quincentenial celebrations too.  As one of the Queen’s Watermen, he was much involved in the organisation of the Thames Diamond Jubilee Regatta held back in 2012. 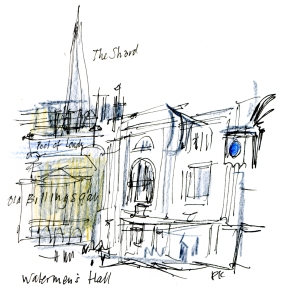 To complete the picture, I wanted to illustrate the much smaller Watermen’s Hall located close by at St Mary Hill opposite the original Billingsgate Market in Lower Thames Street – a charming group of more intimate buildings which, alas, were not large enough to hold such a grand function with so many guests. 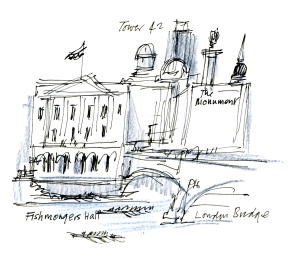 A return visit to London Bridge was also necessary so that I could record the classical façade of Fishmongers’ Hall just upstream from the modern bridge.  I was told that this fine structure once dominated its more humble surroundings, much as The Monument and St. Magnus the Martyr once marked the City end of the ancient London Bridge, much damaged not only by the Great Fire but also the Blitz.

My measured Sunday morning stroll through the narrow streets and alleyways with necessary resting places took me up to St Olave Hart Street where I managed to catch the last part of the morning service once shared by Samuel Pepys.  Afterwards, I was welcomed to a cup of coffee with the congregation and I was able to chat with many, some of whom had commuted from beyond the City and as far away as Benfleet on the edge of estuarial marshes.  This remarkable church has strong Scandinavian connections, and also a chapel for Trinity House.  The annual Trinitytide service is now held here rather than down at Deptford at St. Nicholas Church – a ceremonial procession by city notables prior to an annual service which traditionally was of some significance as reported by Samuel Pepys.  He was not only a member of the congregation but also Master of Trinity House, and was buried there too.

His naval office was almost next door, close to where the Port of London’s magnificent previous HQ stands (once the HQ of Willis Faber too) now being converted into a 5-star hotel, located overlooking Trinity Square with its fine gardens and also the Merchant Navy’s war memorials.  Trinity House itself is indeed a miniature palace, furnished with maritime elegance which has weathered the storms of time – more on this anon when I will promise to report on the Kent-Othen visit last month.