The Rise and Fall of Tower Cranes

Always with an eye on new developments, I scan the extensive waterfront and beyond to spot new giants as they add to high rise London.  Usually a lofty mobile crane installs the essential crane  at the hub or even into the lift shaft at the core of the structure.  Just alongside the O2 at the tip of Greenwich peninsula, the second white crane is being added to the hotel development site as reported earlier.  The Wharf – a weekly news sheet – usually reports on the Isle of Dogs scene and I try not to miss its Thursday publication.  Lo and behold, a property advert revealed the main marketing pic of the Peninsula Tower. 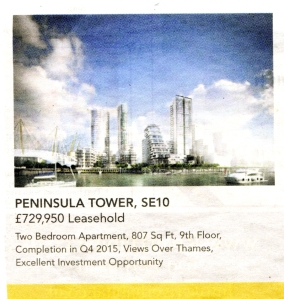 Its dramatic location on the 9th floor will provide stunning views beyond the barrier down to City Airport, up towards the Olympic site at Stratford, across Canary Wharf up to town and, of course, the ever-changing peninsula towards Greenwich maritime frontage with the park and heath beyond.  Down below will be the spectacular O2, a beached whale with its extraordinary transport facilities into town by Jubilee or fast ferry!!

From my studio window I will see the plot thicken as development of five structures proceeds.  Way back, I tried to visualise the location and size of the proposed Millennium Dome.  My window pane sketch was hopelessly wrong as the twists and turns of the Thames at Blackwall Point were most misleading.  This week, with the excuse of curiosity, we went to lunch at the Cutty Sark pub (splendid food!!) and, armed with binoculars, I monitored the erection of the new crane,  slightly ghoulishly as well, as another mobile crane was in action removing the job of a failed high rise crane across the river at Blackwall.

Sadly I recall two other major crane collapses in the last few years, one of each I managed to sketch just after the accident. 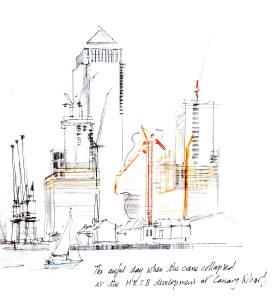 Horrendous experiences to the ‘driver’ (alas, the Canary Wharf accident was fatal), but an amazing escape down in Upper Thames Street, when the complete structure collapsed at rush hour across the usually busy commuter street.  The driver managed to clamber down from on high as its fall was broken by the recently renovated St. James’ Church.  The late Stephen Lovibond arranged for me to enter the church to sketch the appalling scene as the tower and job crashed through into the aisle.  All has now been repaired.  Let’s hope the driver is fully recovered from this nightmare experience.

Another concrete tower has appeared at Elephant and Castle announcing yet another high rise apartment block.  The high rise neighbouring apartments have been made ready for demolition. The old shopping centre is earmarked for future redevelopment as well as the tired and shabby pink coloured façades, which are in a desperate condition.