With the promise of a week down in Cornwall, we left the capital on Easter Monday with the inward-bound traffic piling up in the usual Bank Holiday manner, feeling carefree with nearly empty highway heading west.  A pit stop in Truro City to replace a burnt kettle, and before you knew it, we were on board the King Harry Ferry bound for the Roseland to see the Hack family in their Creekside hideaway overlooking historic St. Just’s parish church, set in its unique tropical garden bordering this ancient creek.

Falmouth’s deep water harbour will be the Tall Ship venue in late August prior to sailing in company along the South Coast and into the Thames for a great event early in September.

Once earmarked for a Royal Dockyard site just like Deptford and Woolwich, fortuitously the proposal was abandoned as Plymouth lay closer to France where a Napoleonic showdown could have taken place.  Henry VIII’s massive forts at Pendennis and close by St. Mawes had protected England from the Armada’s threat.  A fine painting in the Queen’s House at Greenwich depicts the World War II scene at Falmouth and is worth a visit in anticipation of the fleet of tall ships’ August departure.

The vivid painting by John Platt shows the famous lighthouse at St. Anthony’s Head in its WW2 guise and will make an ideal lookout for a Peter Kent drawing of the outgoing fleet outward bound for Greenwich.

This summer’s promise of a tall ship regatta has fired the locals down at Falmouth as much as in Royal Greenwich.  My granddaughter Lottie, herself a competent sailor, was delighted to show me the ropes around the promised fleet as depicted on the internet.  A visit to St. Mawes Sailing Club, with its commanding views over Falmouth harbour, certainly fired me up and as a family we anticipated with glee the unique atmosphere which we have enjoyed before in various venues such as Cherbourg, Newcastle and Bristol.  Lottie’s skill on the internet clarified my views of what’s what. 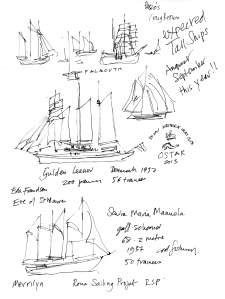 First impressions are that the 40 or so craft expected to participate are mostly of the smaller training and charter vessels and not the grand ladies of the global race scenario.  Familiar visitors to the Thames as seen over the last three annual ‘Sail Greenwich’ events will pop up again, mostly from the Netherlands and UK.

The tan sailed ‘Eye of the Wind’ is welcome back in her old home waters.  She was rebuilt down in Faversham and now looks a very trim ship – so much so that Caroline Nimmo has taken a place on the Falmouth-Greenwich leg – a seasoned sailor who will be an asset to one and all.

We will welcome her reports with interest as we plot the fleet’s progress up channel – shades of the Armada!!