The anniversary of D-Day approaches and, at a recent gathering of naval pensioners on board HMS Belfast, the Prime Minister quizzed them on their actions on board.  Firing a constant barrage to soften up the German defences along the Normandy shoreline, vivid memories of a tour of the invasion beaches came to mind via a Sapper Major acquaintance who guided us to where he was in action.  ~The vastness of the whole project still amazes me.

The ironic arrival on the next day of a German frigate on a courtesy visit to moor alongside astonished me somewhat.  Most months a naval unit visits the Pool of London, and shortly HMS Bulwark – a Royal Marine  landing ship  – is due to utilise the cruise ship moorings at Greenwich which is also open to the public – recommended for nimble lads (alas, a no go area for this old boy!!).

Trinity House, like the Watermen’s Company, is holding a series of celebrations to mark their 500th anniversary of incorporation.

I attended part of a service of thanksgiving held in the tiny, country-like St Olave’s church in Hart Street, which is now surrounded by high rise city skyscrapers. 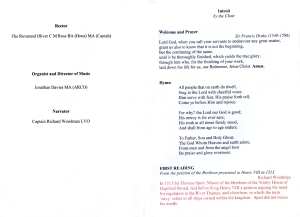 I attach parts of the order of service which I think are particularly relevant.  A reception was later held in their sumptuous HQ building on Tower Hill, which is full of maritime treasures and also a collection of Kent drawings depicting their colourful history.

The exhibition has been assembled by Tony Othen – I hope it might also be on display to the general public either at Trinity House or at other relevant venues.  I can also join in the celebration as it marks the completion of a year’s work depicting their diverse maritime and charitable activities.  This self-generated effort has taken me into 500 years of their history which all stemmed from their original hall in Deptford Strond, adjacent to St. Nicholas Church.  Samuel Pepys and John Evelyn were closely involved – all within sight of my studio!

Part of the Trinity House celebrations included the acceptance of a new Trinity Hosue Watermen’s Cutter which had been built down at Deptford’s Ahoy Centre.  The cutter will be based there for a full programme of rowing events on the Thames, where crews can be trained – very much the ethos of Trinity House, as is the training of youngsters in maritime matters.  By chance, on my return by river, I met two apprentices on the pier who enthused on their career prospects.  Likewise, while at Trinity Buoy Wharf over at Learmouth, I chanced on a coaching session for a working waterman being primed for an MCA examination in the near future.

With promised finer weather, a trip by river up to the Tower is recommended.

Within five minutes’ walk, an overview of maritime London’s heart can be viewed from Costa Coffee House in Tower Hill, just where political meetings were once held (like Speakers’ Corner), also where escapologists entertained lunchtime city workers wrestling with their chain bondage.  Just across the road the Merchant Navy Memorials spell out the reality of WW1 and 2 dramas at sea.  The former HQ of the PLA is being converted to an hotel;  its neighbour Trinity House, which once Samuel Pepys frequented close to St Olave’s and the Navy Office next door just off in Seething Lane (1660 – 1673).

In the dim and distant past, the cellarage under Tower Hill was most extensive, and the Kents helped to enhance the vast wine vaults ready for a City Festival Event.  After much planning and landscaping, the parties were a roaring success.  Shame that the organisers went bust!!  Off with their heads!!

Talking of D-Day, Britain’s largest landing craft came up to Greenwich for a week’s visit, full of Royal Marines.  The assault ship would have been very useful back in Normandy, but it needed three tugs to manoeuvre her into Greenwich Ship Tier.  Just as she slipped into her allotted parking space, a bright white cruise ship crept past on her way up to the Pool of London

The mooring crew – local lads from Woolwich – had arrived in good time;  their skill in tying up to the buoys always amazes, while the attending tugs left in convoy back to their Gravesend base, showing off by going astern or forward at will, all owned by Switzer – a Swiss company.  The crescendo of deep-throated engines filled the reach with such unusual activity, shocking passers buy dodging the intermittent rain which has blighted this Spring holiday.

please see  this cutting from Navy News – which I buy from the National Maritime Museum bookshop.

One response to “Dunkerque and D-Day recalled”