Keeping up with the pace of development is a challenge to all who live by Father Thames.  From my windows a forest of ever-changing cranes heading up development sites needs daily monitoring!!  I am always fascinated by their elegant manoeuvres as loads great and small are swung up to ever-growing lofty heights.  Of course unusual barge-borne cargoes attract my curious eye too.  Large structures seem to glide past in both directions, proving a challenge to identify – the size and number of tugs pushing and pulling often with a bevy of escorts denotes the care which is taken in navigation.

Just yesterday, a ‘jack up’ platform appeared just off Enderby Wharf where once a hub of underwater cable manufacture attracted magnificent cable-laying ships – now awaiting a promised cruise ship terminal which should dock in 2017 – ho ho!!   A full page in the Meridian magazine of last August tells the tale.

A trip onto the Peninsula gives the bus rider a taste of what’s to come.  Mary Mills, an ex-councillor and authority on the vast industrial complex of yesteryear, manages to keep pace with a far from simple saga.  Nick Raynsford MP was at the Forum in East Greenwich to see what the Mayor of London’s intentions are regarding a new road tunnel link towards Excel and Canning Town and Silvertown / City Airport – part of a series of cross-river crossings which are so essential, as discussed in my previous blog. 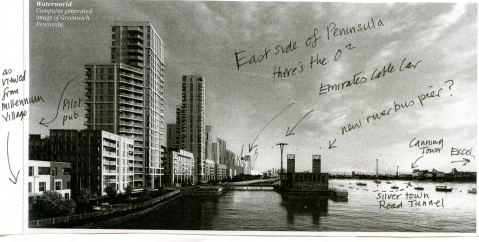 Well, I had to do my homework before attending the ‘Architecture of the River’ forum at the ORNC.  I need to do a recce of both banks of the Peninsula riverside frontage – shock horror! The scale of present and proposed development is massive, competing with Canary Wharf and the ‘Island City’ at Canning Town.

Not so many years ago the London Rivers’ Association (based in Greenwich Market) hosted a series of public forums which presented a regular review of proposals up and down the tidal Thames. Its members were drawn from every profession, trade, residents who were in the firing line of change.  George Nicholson and Rose Jaijee had skilfully organised a regular monthly dialogue since 1986.  Alas, funding from riparian authorities was cut and the LRA faded into obscurity.

Eric Sorenson, once chief executive of the LDDC, introduced the full house to a pictorial overview of Thameside developments and a panel of experts had much to say to a delightfully mixed audience (including LRA members).  I had the gall to raise the idea a of reinstatement of a similar forum to be sponsored by our hosts with the University School of Architecture and maritime centre of studies.

PS:  Re-reading ‘Rivers of Meaning’ published by LRA in 1996, Eric Sorenson’s article ‘Bridging Barriers’ is as fresh and as pertinent today.