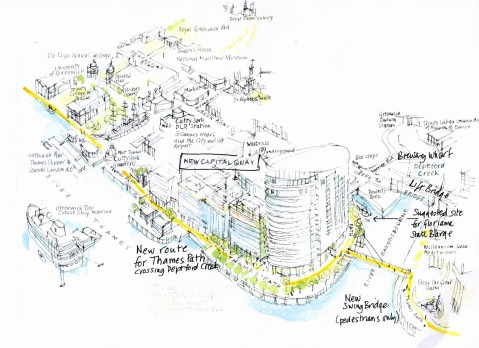 A new footbridge swung into action on Monday 19th January, traversing Deptford Creek and linking two new residential developments – New Capital Quay,  with its new Waitrose,  and Millennium Quay with its extraordinary statue of Peter the Great – creating a fascinating new link to the Thames Path.

By chance I saw the coaster ‘James Prior’ leaving its cement depot Norman Road berth, passing through the Creek Road lift bridge outward bound for Fingringhoe on the River Colne to load up with another bright yellow cargo of recently mined sand.  The narrow entrance to Deptford Creek has been navigated since Viking days, one of the hidden ports which sustain the London River on a daily basis.  The ageing coasters can be spotted as they come and go at the top of the tide.  They have a sentimental place in my ageing heart because, as a lad, I used to play with my Colchester chums cycling up and down the switches and turns of this prosperous sandpit just opposite Wivenhoe – a 20-minute cycle ride from my birthplace! 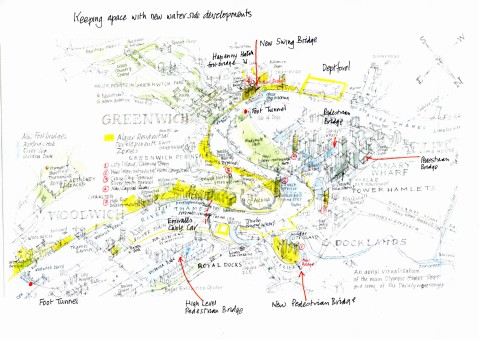 I can also report on another foot bridge opening, over the tidal River Lea just across Leamouth Creek from Trinity Buoy Wharf, linking Island City’s Manhattan-style development to Canning Town’s significant transport hub of the Jubilee Line, the Overground and DLR;  worth a trip to the Cross Rail construction site just there.  Be sure, while you are there, to look for the brand new Cross Rail station at Canary Wharf awaiting the opening of this astonishing west-east rail link.  The extraordinary developments in Docklands and Greenwich can be viewed from the DLR as its various branches snake through tomorrow’s world

More recently, a new service bringing aggregates from Gravesend’s Denton Wharf to the upper reaches has been initiated utilising larger ex-Dutch coasters, navigating under the many bridges which span the Thames in Central London.  The Battersea Power Station development is reliant on such carriers of building materials. 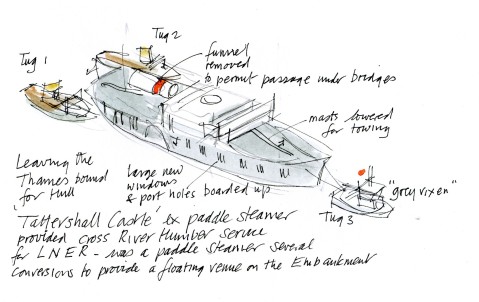 Another historic vessel passed by today under tow by three tugs as it left its Embankment mooring (close to Charing Cross Station).  ‘Tattershall Castle’ was once a paddle steamer which crossed the River Humber linking Lincolnshire to Yorkshire’s Kingston upon Hull.  Now the Humber Bridge replaces this historic ferry link once run by LNER.  In my long-ago drinking days I enjoyed a pint or two on its deck or within its spacious saloon with its stunning river views of Westminster and the South Bank.  I was delighted to see Chris Livett’s new tug ‘Grey Vixen’ at work, a local waterman whose fleet of leisure craft work in and out of Butlers Wharf, renowned for their film work.  Chris is a Royal Waterman and past master of the Watermen’s Company – his father was a skipper of a London tug for many years too!  I am told she’s off from her home port to Hull for a general re-fit.

One response to “Joined up Communities”