A surprising late night call from my godson, Chris Hartley, in Sydney, to tell me that his local tall ship the ‘Young Endeavour’ is due to visit London this summer.  She was a gift from the UK to celebrate Australia’s bicentennial celebrations back in 1987.  Her passage upstream will pass the Cutty Sark – no stranger to these far-off waters – hopefully she will dock either in St. Katherine’s haven or perhaps alongside another naval shore base ‘HMS President’, an RNVR establishment close by in the Lower Pool.

STS ‘Young Endeavour’ was dedicated to the benefit of the young people of Australia, and is operated by the Royal Australian Navy, mostly on the east coast of Australia.  Over 20,000 youngsters have enjoyed an outing on this brigantine which was built in 1987 at Lowestoft, and has circumnavigated Australia twice and sailed around the world once.

Christopher Hartley is the son of good friends whom I met in Singapore while on national service.  Further news from these parts celebrates Singapore’s 50th anniversary with an unusual rowing occasion.  A keen oarsman too, he had brought a Tasmanian eight to row at Henley.

This round-the-island row will pass by some of my old Singaporean haunts of long ago.  Organised by the Mission to Seafarers, it coincides with 2015 Singapore Maritime Week and our golden wedding too.  The craft to be used are two classic rowing boats based on a Cornish pilot gig design which do very well in the annual Great River Race on the Thames.  The Mission to Seafarers is a global organisation which sprung to the aid of distressed crews marooned far away from their home ports.  Dominic Hasan on 020 7246 2937, or by email at dom.hasan@missiontoseafarers.org. 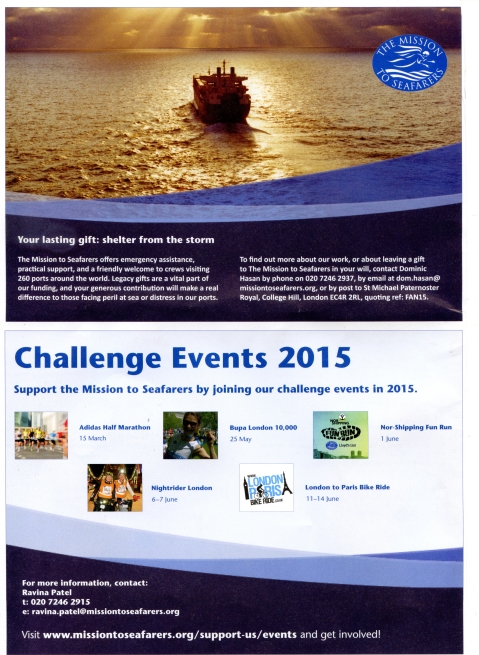