Re-exploring the changing Peninsula scenario – from Ballast Quay and beyond.

Keeping an eye on the rapidly changing riverside scene downstream from the Royal Naval College is indeed a challenge.  Living and working on the cusp of the historic waterfront is fascinating, as once-familiar landmarks disappear under the demolition bulldozers, and developers’ heavy plant take over with cranes looming over the ever-rising construction sites.

At Enderby Wharf, behind the Thames Path’s perimeter fencing, a vast new community is forming.  Barratts’ ‘showroom site hut’ explains their development intentions.  The first two phases along Christchurch Way are well under way and show the size and scale of their intentions. 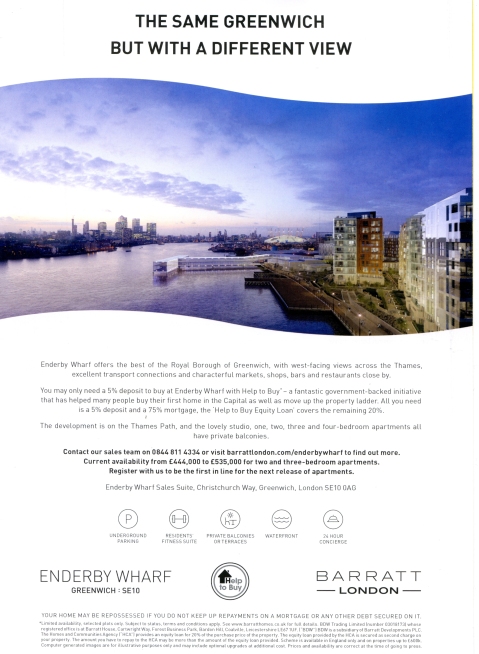 Having obtained their glossy brochure, I decided to sketch an outline isometric impression of what is planned between the existing boat yard with its floating dock and working wharf and Enderby House with its existing jetty, still bearing some of the submarine loading gear.

The adjacent site up to Morden Wharf is earmarked for the proposed new cruise ship terminal with an adjacent hotel.  My isometric sketch impression is based on the glossy development brochure, both part of my understanding of what is proposed.  The show suite, sited just off the Thames Path, is a large model which should also be studied.  While there, I happily met a young Singaporean student who was also surveying the waterfront in detail.  An architectural student from UCL, he had been given the task of visualising some suitable project along this very same shoreline.  Through the years, and with the help of Mary Mills’ historical summary of the industrial prowess with which the Peninsula became of global note, I was able to relay to him how things once were around this densely-industrial waterfront of yesteryear, not unlike Singapore.

During my national service based on this one colonial fortress and trading base, I also found myself exploring his home territory some sixty years ago!!  And here we were, both trying to visualise how the Peninsula will look.  Singapore has been developed in a massive manner including a lot of land fill, especially along their city centre waterfront.  Far East investment is more than evident on the other side of the peninsula, extending the Millennium Village almost up to the O2.  More of this anon!

Why not take a stroll down to the Cutty Sark pub and continue along the Thames Path towards the O2 and see the remarkable developments under construction on Ballast Quay.  Now the weather is improving, utilise the pub’s excellent riverside tables, have a pint with a Scotch Egg!!  An Easter treat indeed!

2 responses to “Re-exploring the changing Peninsula scenario – from Ballast Quay and beyond.”