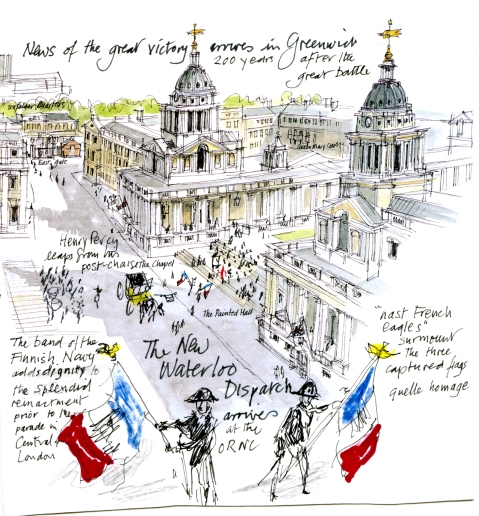 A white uniformed naval band from Finland greeted the re-enactment of the New Waterloo Dispatch played out in the RNC Grand Square of Greenwich Hospital.  Two gallant naval officers bearing the three Napoleonic flags, all eagle-mounted standards captured on the battlefields of Waterloo, were being rushed from the scene of capture on the battlefield to Westminster for presentation to the Prince Regent in St James’ Square.

Peter Warwick of Thames Alive, who had also organised the historic re-enactment of Lord Nelson’s funeral flotilla from the Grand Square up by river to St. Paul’s, realised the suitability of our ‘next door venue’ for the start of London’s great event.  Ten or so military bands were to perform at a series of historic locations around the Sunday capital, calm again after the angry demonstrations held in central London the day before. 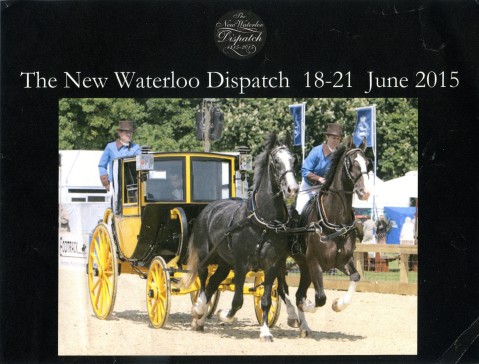 Peter had organised the celebratory carriage journey from the actual battlefield through Belgium and across La Manche to Broadstairs, where a becalmed frigate dispatched their ship’s duty, escorting the trophy standard as quickly as possible to announce this famous victory to the powers back in London via Watling Street,  Canterbury, Faversham and on to town, greeted by a series of parades performed to Londoners, and then into St. James’ Square for a day of ceremony when the Prince Regent received this surprising trophy of three much-prized battle standards and the astonishing news of Napoleon’s defeat. 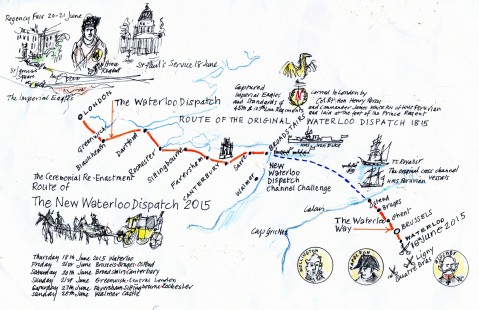 Just before breakfast, we aroused a newly-arrived Kiwi family from across our street to witness this imaginative historic event.  Thames Alive had also recently played out the Magna Carta event on Runnymede’s historic Thameside meadow.  A flotilla of historic craft manned by rowers performed a similar two-day celebration for both occasions.  I had enjoyed mapping out their intended routes for pre-event usage.  The occasion, with its gathered civic worthies, became a morning reception prior to chapel.  The suddenly presented suggestion of a parliamentary move as discussed was clarified by the brilliant idea of Buckingham Palace becoming a more suitable venue, with replica chambers for both the Commons and the House of Lords.  How about that!!