News from my birthplace in Essex

I was intrigued by an outstanding commission for an old river friend, John Greenleaf, to illustrate a joint new enterprise shipping aggregates in bulk by water from Gravesend to Battersea.  John recently retired from running Priors fleet of motorised barges from my home river, the Colne, daily up to Deptford Creek on the Thames.  This was remarkable as each day I had a reminder of my boyish interest re-enacted outside my Greenwich studio.  As a lad I had played around in the Fingringhoe sandpit, and seeing a cargo of yellow building sand pass each day past my Crane Street window is very sentimental for me!

So, to further this experience, I went down to John’s home set amongst a paddock full of ponies bang next to the sandpit, opposite on the riverside at Wivenhoe, where many a historic vessel has been built.  Somehow or other we missed each other as he had to collect some essential hay from nearby Peldon.  His daughter kindly obliged with the required reference material, including a snapshot of her own little girl Yassam, his three-year-old granddaughter, who bears her name on Grandpa’s latest ship!  Likewise, Steve Nicklen from Kent has named the twin vessel after his granddaughter too.  This joint enterprise is also involving new youngsters in new river freight skills – I am all for grandpa enterprise!!

thanks to The Greenwich Visitor

Close to hand back in Greenwich, Paul Deverall has moved his ship yard at Pipers Wharf shore line facilities to just a stone’s throw away to Bay Wharf where, with his son, new life has been introduced to a marine repair business.  Even his floating dock has been repositioned while his established Thameside moorings remain off shore.  Deverall’s yard at Pipers had been there for years and must have been a real headache to clear; but the accumulation of marine clutter must have been a scrap monger’s dream.  Now the promised location of the cruise ship terminal is all ready to start!

When down in Fingringhoe at John Greenleaf’s barn home, I took the pleasure of going down memory lane recalling the scene some seventy years ago when, as a lad, I cycled along the River Colne touring and sketching all things maritime.  At Rowhedge, the iron works was always worth a pause; the sight of a prefabricated river launch sitting in the field prior to being packed off to Africa comes vividly to mind.  Also a ferry row boat trip across to Wivenhoe where the tall ship ‘Cap Pillar’ lay abandoned at a ruined mooring close to the station, her tall masts and rotting hull in need of attention.  A fish packing station was still active bordering the little riverside townscape, a variety of typical Victorian Essex terraced cottages lay alongside some grander period houses lining the quayside, and also the riverside yacht moorings opposite a convivial pub and The Nottage Institute where young seafarers were trained.  Further downstream in those days James Cook’s shipyard was still active – a public footpath provided great views for this youngster.  A sail training ship was in the stocks which I am told took years to complete at a loss – so typical of similar enterprises which, alas, went bust.

Adding further to our romantic journey, we lunched in the famous ‘shed’ set amongst the haphazard moorings along West Mersea where fishing boats, some yachts and an abandoned J Class yacht which once provided wonderful B&B facilities for us poor art students, one of whom insisted in ‘driving’ his golf balls for an early morning exercise.  I feel sorry for the rude awakening of yachties as a sudden direct hit must have caused some alarm.  Vivid recollections of midnight skinny dipping still come to mind – makes an old man chuckle too!! 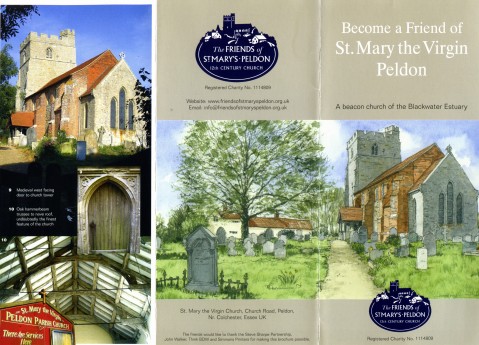 Returning to our teenage playground we paid homage to St. Mary’s at Peldon, a 12th Century church overlooking the River Blackwater’s extensive marshes which the Dutch reclaimed as valuable grazing land.  Now the tide has turned and new breaches through the sea wall to facilitate tidal excess have recently been made at Copthall with its tiny church alongside, all part of the East Coast’s effort to prevent the tidal floods of yesteryear.