The Port of London Authority is always on the move. Remember the grand HQ building, purpose built in monumental style on Tower Hill dominating the Pool of London with its long views downstream over the warehouse-dominated Upper Pool, London Dock, West India Docks, The Surreys, East India Dock on to the Royals and the multitude of riverside wharves and factories as far as the eye could see – what memories!

The extraordinary dock closure and the demise of the great imperial port has created opportunities of the London Dockland Development Corporation and the PLA itself as land sales whistled through. As a young graphic designer, I was much involved in the marketing of these tracts of disused docks and became involved in preparing enterprising schemes for both UK and overseas developers and investors. 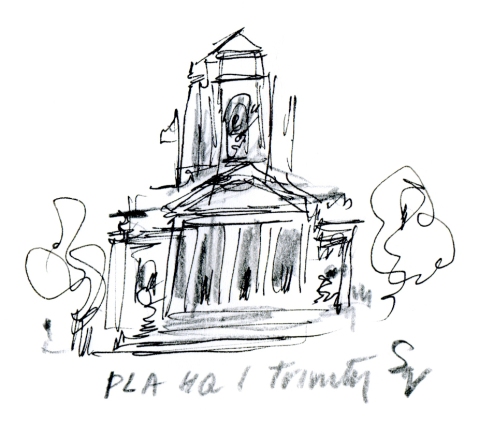 Since those heady days, the PLA has downscaled into smaller and smaller HQs up in the City. From a new build in St. Katherine’s’ Dock then on to a riverside building overlooking the river where there were still remnants of adjacent trading wharves, then up to offices above Bakers Hall overlooking the Customs HQ in Lower Thames Street, and then into Pinnacle House overlooking St Dunstan’s ruined church yard (now a restful retreat for city workers), providing an ideal venue for the first get-together of river enthusiasts from a diverse panel selected to table their various enthusiasms.

Meanwhile a newish HQ at Gravesend just opposite Tilbury Docks provides a base for the diverse specialists to run an expanding estuarial demand for bulk cargoes and, of course, container ports to serve European and global requirements. At nearby Denton marine facilities are based to serve all the tidal Thames and its estuarine approaches. Here there is a purpose-built wharf, slipway and moorings for every type of vessel, including a fleet of tugs which nurse ships great and small under the eye of the Port’s own pilotage service, delivering vessels to their required destinations.

Gathered together for the first time, consultations led by PLA’s Katherine Riggs focussed on ‘a Thames vision for culture and the community’. A diverse gathering introduced themselves and launched into their particular interests and projects – a unseful forum not too dissimilar to the ‘late’ London Rivers Association based in Greenwich, but relating to the tidal Thames. The disbanded forum was well-informed and discussed diverse matters of interest to riparian institutions and activists, including corporate institutions. It was an unusual gathering of individuals who could air their views in an organised and civilised manner. Alas, George Nicholson and Rose Sargee were unable to find the necessary to finance this intelligent group after funding from the riparian boroughs failed. But hopefully there’s a prospect of formulating a similar platform. 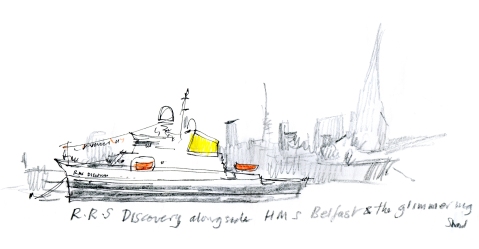 On my way home via the Thames Clipper I was pleased to see the latest research ship ‘Discovery’ moored alongside HMS Belfast. The PLA kindly gave me a most informative press release about her and her far-flung activities: –

Discovery is the latest of an illustrious line of vessels to bear the name: the first being the ship that took part in six expeditions in search of the Northwest  Passage – during the 1610-11 expedition the crew mutinied and set their captain Henry Hudson adrift in a small boat; the 1901 version of RRS Discovery carried Robert Scott and Earnest Shackleton on their first, successful journey to the Antarctic.
Discovery is the largest of the UK’s research ships.
It is one of four vessels owned by NERC.
The captain for the Bahamas expedition will be Joanna Cox, the first female captain of one of the research ships.
The Natural Environment Research Council marks its 50th anniversary in 2015. It was set up to support the best environment science, to advance knowledge and technology, and to provide expertise for the benefit of society.

Memories of Scott’s Discovery alongside the Thames Embankment and later in St. Katherine’s Dock brought an evocative reminder of lectures held in her atmospheric ward room. She now lies in Teesside as a museum ship and, no doubt, imparts the mood of her adventures which have been brilliantly recorded and photographed and dramatically displayed at a NMM exhibition here in Greenwich.

One response to “Discover more!!”