Sweeping up after the storm

Well, the last of the leaves are still being blown away as the wind screeches over the incoming tide, creating a fiesta of waves. The bright red ribs skim over the breaking surf providing a thrilling ride for one and all. Thank goodness they are kitted out with waterproofs before boarding at the various up-town piers. The occasional pause to take in the principle sights, with a roar of engines they flash past our sedate riverside house just like the sleek Thames Clippers as they cut through the sharp, short, sea-like flood tide. The gulls dip and swerve as they commute back to the creeks and landfill sites on their way home after they plunder the rich pickings up in the city, cavorting up the exposed reaches now crammed with high rise developments ablaze with lights and stunningly bright red warning lights as jets lumber into their final approaches. Greenwich landmarks ablaze with seasonal decoration revitalise architectural treasures now fully exposed for all to see – much to the relief of the Royal Borough’s street cleaners. A parade of vintage cars adds reality to the film makers’ version of a post-war drama. A glimpse of a 1929 Morris Saloon similar to my first banger from Essex stirred jolly memories too!! 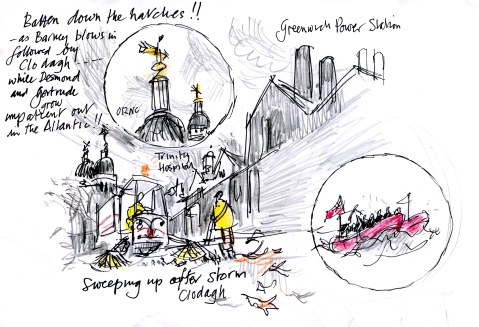 The Thames is stacked with memories as the late November dusk sweeps across the tideway to clash with even more weather fronts as the tide turns to join the massive movement of estuarial waters past the miles of moorings bereft of treasured craft now safely ashore, all lashed down to meet the winter’s worst and yet another round of repair and painting in the hopes of an even better log book of next year’s travels. At last the strong wind makes peace as the incoming tide swings to the ebb. But our house still creaks and groans as dusk falls too – the fury of the spume-topped waves relax to a calmer scenario, much to the river trippers’ relief!!