Conservation and preservation are the watchwords for the maintenance and upkeep of our Thameside structures which sit upon Greenwich’s historic shore line.  The seasonal weather with not only strong winds and tides but also the wakes of fast moving vessels batter the river’s edge causing erosion.  As being a riparian property owner, one is even more aware of repair and replacement costs.  The replacement of our wooden viewing deck was completed only a few years ago over the Christmas period.  The up-river man & son team did a brilliant but lengthy job as they were already committed to overseeing the mooring arrangements at the London Boat Show in the Royal Docks before and after the event just after Christmas.  This week a procession of slick, luxurious motor cruisers have been cruising up and down the tideway having travelled here from shipyards at home and abroad prior to being on display at the Excel’s glittering exhibition halls.

The reassuring arrival of a crane-bearing work boat reminds me of those anxious days and nights some five years ago when the tug-hauled barge and lighter removed the old rotten structure and installed a ‘fit for purpose’ wooden structure on site as determined by the Port of London Authority.  Likewise, this week a modern motorised crane barge ran onto the neighbouring foreshore to offload building materials, including sand bags to protect the urgent repairs to Trinity Hospital’s embankment and the ancient landing steps, now disintegrating.  The observant pedestrian will notice along the river path at the Old Royal Naval College a similar scarring damage to the foreshore exposing pilings and pier remains of the front of the Palace of Placentia – (a problem also to be seen at the Tower of London).  Fortunately for us at our end of Highbridge, sand and gravel has been washed up to protect our new pilings and river wall – even  completey obscuring a recently installed slipway for use by our neighbouring rowing clubs – Plus ça change… 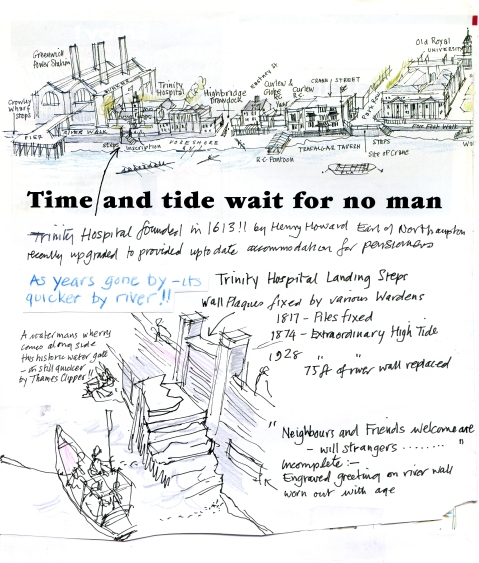 More Power to your elbow – despite the last pit closure!

The dominating Greenwich power station which overshadows the architectural gem of Trinity Hospital is having new life for its long-empty wing to introduce new generating engines to add additional power to the neighbourhood old and new.  A further new generating facility is also being built down by Blackwall Tunnel – to cope with its ever-expanding citizens.

One response to “Conservation and Preservation”