A major new landmark has sprung up at the main access roundabout by the Holiday Express Hotel – a large low-rise energy centre designed by C.F. Møller is identified by a 49-metre high, camouflaged extract chimney. The Thames Reaches were once known by landmark power stations, at Brunswick Wharf just opposite the O2 and another power station on the peninsula down by the old Yacht Club; while at East Greenwich the quaint structure and its pier is still very much evident as new high rise apartment blocks crowd in around it.

1 Conrad Shawcross has devised a dazzle camouflage similar to the First World War scheme on naval vessels. Now the main structures are up, one awaits for these abstract shapes to be installed. 2 The proposed cruise ship terminal nearby has run into planning problems because visiting ships will be reliant on their own engine power while alongside – not much joined up thinking here!!

3 Further down the peninsula, past the giant Victorian Gas Holder and the new Golf Driving Range is the extraordinary inverted electric pylon crashing close to the access road to the giant new Intercontinental Hotel, just missing the trio of Blackwall Tunnel mushroom-shaped concrete air vents.

4 Just downstream from the O2, a further residential development has started marked by a pair of colourful construction tower cranes which will be joined by others as further phases develop. The extraordinary ‘stepped’ blocks will be topped with landscaped roof gardens, creating a new style to river watching!

5 Trinity Buoy Wharf adjacent to East India Dock’s river access close to the new City Island development at Canning Town is taking shape (view it from the DLR). The access foot bridge is now installed and will relieve the single access road off the Lea Bridge Crossing. A visit to Trinity Buoy Wharf is well worth investigating – lighthouse, lightship and arts centre. 6 Aerial views can be enjoyed from the Emirates Airline – take a return trip as there is much to be seen.

The Thames Path gives pedestrians and cyclists exciting views. Take a break at Peninsula Square to view the exhibition in the Pavilion close to North Greenwich interchange. 7 The adjacent Craft and Greenwich Kitchen will surprise!! 8 For inside the Peninsula, the Pilot Pub – a Fullers pub – will satisfy your thirst.

Looking beyond, the Urban Village Fete on May Bank Holiday should be as fun as it was last year – to be held in the new park area just off Peninsula Square.

We await the various responses to this campaign – as always there are two (or more) sides to every project. 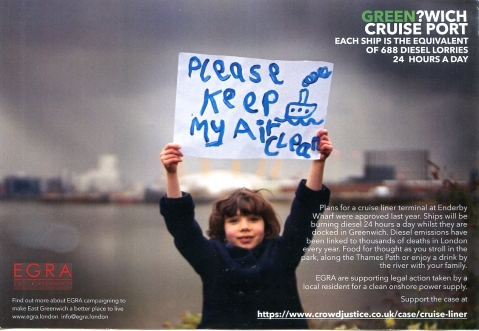 2 responses to “Spring has sprung”