City to Countryside and back by rail and boat 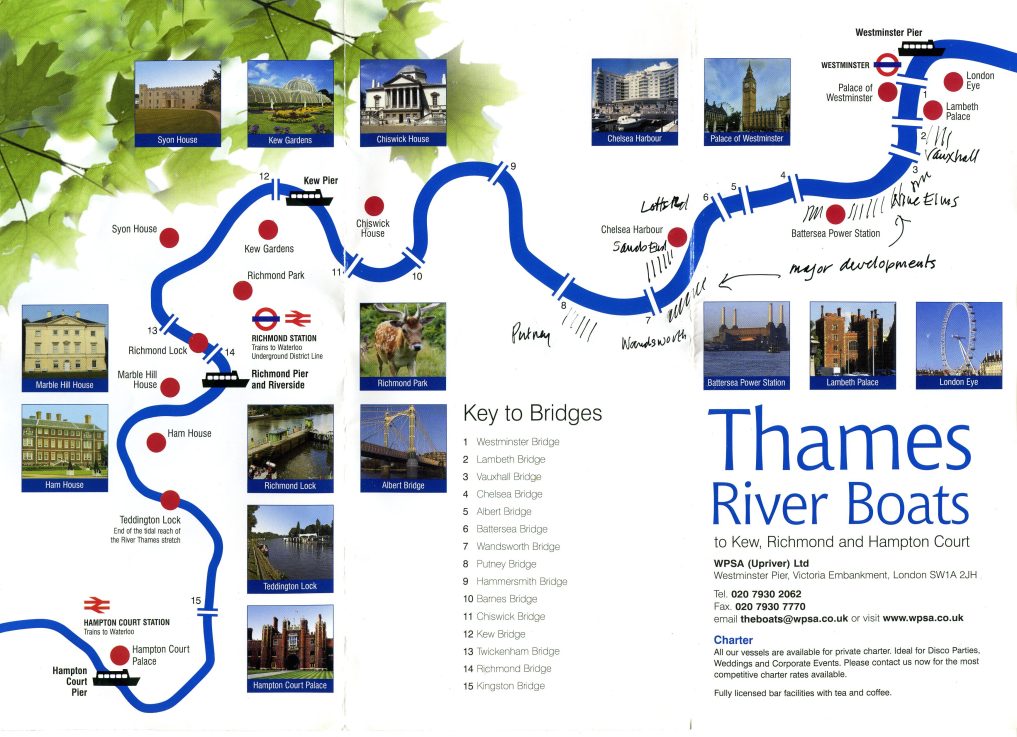 Most summers we try and take a ‘tripper boat’ from Westminster upstream to Richmond and even as far as Hampton Court. It’s the only way to keep up with the ever-changing landscape. This wet summer has benefitted general greenery and especially tree growth, never mind the extraordinary impact of riverside construction. We also witnessed the chaos of suburban railways, especially at Waterloo as timetabling was re-jigged to the whims of rail unions. A slow departure gave us a chance to view the spate of high rise developments between Lambeth and Clapham Junction, many to compliment the relocation of the US Embassy and, of course, the massive works around the Battersea Power Station redevelopment.

Happily, Richmond certainly addresses the Thames with a new but traditional river frontage with elevated terraces and tree-lined riverside walks which have been so lovingly retained and maintained – a delight to return to. Alas, our short visit was over as we gathered at the humble pier to board the packed double-decked launch for our 90-minute journey downstream to Westminster. The launch paused to pass under the elevated tidal barrier and fortunately our voyage was enhanced by the high tide providing us with semi-elevated views across the adjacent park land and into the riverside communities.

One short pause at bucolic Kew Pier to collect keen but tired ‘gardeners’ on their return to the capital and astonishing change of landscape at Putney, Wandsworth, Battersea and Nine Elms, with Vauxhall too!

Living by the river is indeed a privilege but essential upkeep occasionally requires a network of scaffolding to get up to the roof to effect basic maintenance, which we thought we ought to do while we are still able to cope with builders and roofers. Our exposed location recently came under surveillance when ‘Maplin’, the PLA’s survey catamaran, cruised up and down inspecting the foreshore. As recently described on Riverwatch, increased river traffic maintaining the capital’s infrastructure is always scouring the tideway’s shorelines as mud and silt is disturbed by the wash and undertow created by everyday river traffic.

In our 20 years here in Crane Street we have had to rebuild the deck – ‘not fit for purpose’ according to the PLA – which protrudes out into the river by some 6 meters was an expensive exercise involving barges and floating cranes and the expertise of engineers who are used to building along the Thames in exposed situations.

Our next door rowing club has to deal with the installation of a heavy, steel portal to get to and fro from their boat house, and a recent slipway constructed to aid their activity has disappeared from sight, buried under sand and gravel. Likewise, maintenance of the river wall also needs constant attention. The ancient Watergate steps leading up to Trinity Hospital and river wall is yet again under siege, and ‘Maplin’ has been in attendance. Our recently erected scaffolding would have been noted and no doubt monitored along with our lunch time sandwiches – (I jest!). However, historic reflections of the craft which have moored here through the centuries provoke romantic dreams of Venetian galleys which the Doge wouldn’t permit to enter London’s piratical upper reaches. Thames sailing barges and traditional lighters are two a penny as well as colliers and Dutch coasters.

The purpose-built cast iron wharf serving the iconic twin-halled power station attracted sail- and steam-driven ships which came up river to feed Greenwich Power Station as well as many similar at Blackwall, Battersea and Lotts Road Chelsea, to name a few. The gracious four chimneys still dominate our local river scene, and I wonder if the fancy new all-steel-latticed chimneys which have slipped in beside Tunnel Avenue to power the giant Peninsula developments will do as well.

By the way, on our recent up-river trip we only spotted one of the Battersea iconic four still standing, new being dominated by high rise apartment blocks!! As at nearby Deptford too, where Mr. Ferranti managed to send his power to light up the West End too – bravo! – what wonders running along the rail arches to Charing Cross and beyond.