Time to celebrate again on the tideway

We returned back to Greenwich’s Crane Street after a few days up in Norfolk with good old friends to avoid the decorators – or should I say sanders after reinstating the ground floor’s wooden surface of old pine after 20 years’ heavy traffic between kitchen and dining area.  Living straight on to the pedestrianised street is an art in itself!  With cyclists, rowers and families alike, it certainly has character.  The sanding boys moved in and completed the job on time and very pleased we are too as its light colour reflects even more light.  The snag was removing the furniture elsewhere – mostly on the deck under a tarpaulin – reinstating our clutter in spite of help was indeed an exercise which we don’t wish to repeat too often!  We can, however, survive while the painters finish the job.

Having completed the first phase, we took a well-earned rest with a light lunch on our top deck with its spectacular river panorama.  To add to the sense of peace, we watched an unusual sight of a string of narrow boats which must have completed a circular tour of the capital via creeks, canals and dockland basins.  One by one they chugged along with the forward deck area well protected from fast clipper traffic whose wash can cause quite a bow wave and give the crew sudden unusual excitement, tea pots and all, their arrival back to calmer waters much appreciated by one and all.

Amongst all this Sunday excitement, a very familiar ‘stern wheeler’ passed by on its way to the O2.  Empty of passengers, it suddenly reminded us of a luncheon party to be held that very day.  A thoughtful and reassuring phone call told us that a pickup could be arranged at the Cutty Sark pier in a half hour or so to pick up these negligent and humble guests. 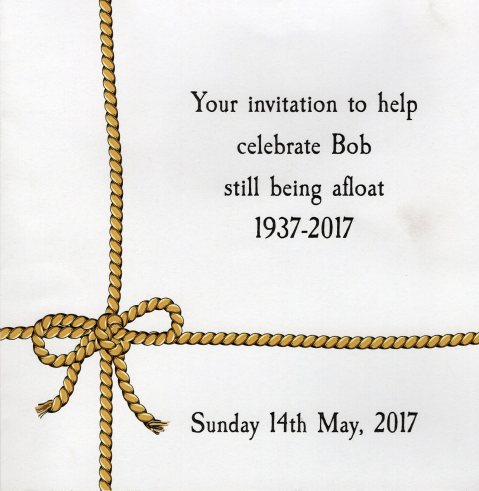 Panic in wardrobe to get into suitable glad rags as requested on the invite from Bob Crouch who was celebrating his 80th with his watermen friends and their families.  Covered in remorse, we were helped on board the ‘Elizabethan’ with care and attention from most of the crew and Pier Master – much humiliation – to find fellow guests tucking into their starters.  Our ‘table’ had restrained themselves before they tucked into their delicious roast beef – how gallant!

I should explain that we had a family wedding reception on board for our Ben and his bride Venetia some years ago, and what a happy occasion that was too.  The ‘Elizabethan’ was built at a Greenwich yard for Richard Branson and later sold, much improved by the Livett family who happened to be at the same jolly table.  There’s nothing quite like a Waterman’s Family party, and renewed friendship and happy memories abounded accompanied by a singalong with a jolly band as we sailed up to Westminster and back.

As reported, both Bob Crouch and his daughter Belinda had rowed past last Sunday in the first Waterman Thames Cutter race which I am glad was a resounding success and bodes well for a similar event on the tideway next year.

Unexpected sail pasts always amuse:  Hugo Boss, the purpose-built international racing America’s Cup ‘machine’ usually based on the Solent, sailed past the Intercontinental Hotel at the O2, the lofty mast competing in height with the recent Tall Ship event.  I wish I had seen her in comparison with a Thames sailing barge.

Two super yachts are also up here, moored alongside HMS Belfast – a tideway of contrasts!