An artist’s interpretation of the Battle of Trafalgar

With the sounds of sabre-rattling very much in mind, I was privileged to take in a preview of ‘The Battle of Trafalgar’ as painted by David Gommon at The Greenwich Gallery, which runs until April 29th. 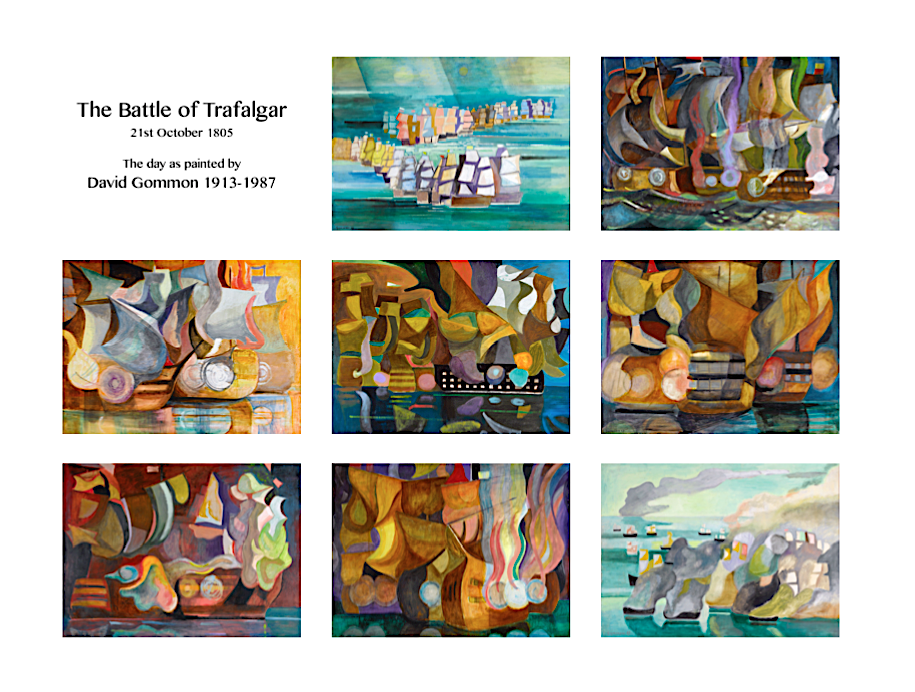 A vivid sequence of the artist’s impressions is described by Brian Lavery, Curator Emeritus of the Royal National Maritime Museum in a limited edition book available to order from the Gallery.  Brian is a local neighbour, as is also the famed Trafalgar Tavern – another treasure house of Nelson’s genius.

Last year Judy and I were whisked around for a week by the Laverys, visiting Historic Ships of Britain for a magical personal tour, beautifully organised, fed and watered and escorted around the major maritime venues in Portsmouth, Southampton, Bristol, here in London and down to Chatham Dockyard.  The small party of Naval enthusiasts from across the pond were treated to a detailed tour around various historic dockyards, including on-board visits to Nelson’s ‘HMS Victory’ and nearby ‘HMS Warrior’ and a personal escort around the Mary Rose Museum by Chris Dobbs, an original member and diver of the project.  In contrast, a visit to the RN Submarine Museum, tea at sea on board Thames Sailing Barge Alice for a tour around the Naval Base to view HM Ships (new aircraft carriers!!).

Then to Southampton Sea City Maritime Museum and by coach to go on board ‘SS Great Britain’, a boat trip around the docks, and then staying at Avon Gorge Hotel with its views across Brunel’s Suspension Bridge.  Next day viewing maritime treasures at Greenwich and on to board HMS Belfast and a final dinner at the Trafalgar Tavern – what a treat!!