Lockdown on the River Thames

The sudden silence imposed along the tideway was almost complete as the government clamped down on commercial traffic.  For the first time we heard dawn’s bird song from the Isle of Dogs – the silence reflected the stillness which we had never really witnessed.  We could hear the clarity of the really early dawn chorus as gulls and waders searched the empty shoreline for breakfast.

The regular patrols from the police, the harbour master continued – and only essential civil engineering took place as tugs towed a new breed of barges to keep giant civil engineering apace up and down their marine building site with its new piers and embankments.

A fortnight of almost complete silence was really scary as mirror like images span from bankside to bank.  Even the lofty skyscrapers, highlighted by flashing navigation lights, seem to echo around the jet-free skyways.  The lack of road traffic and rumble of commuter trains induced long oversleeping. However the giant workforce will come to life again and that eerie silence will eventually be shattered as energy returns.

Way down stream essential industry and food and fuel distribution, even shipping, staggered back to life.  Only the ranks of parked cruise ships in and around Tilbury Docks emphasised the acres of sites where far sprung container ships waited to re-join the great global trade routes and spring into life again.

Superb summer weather teased the furloughed to stir again, and planners to retrain the ambitious, on line, for a return to work.  Time will tell how the promised rebound will turn out.  This sketch map, first published in 2013, might well re-energise the concepts and hopes of yesteryear and give incentive to upgrade the dreams of creating another Canary Wharf way down stream!! 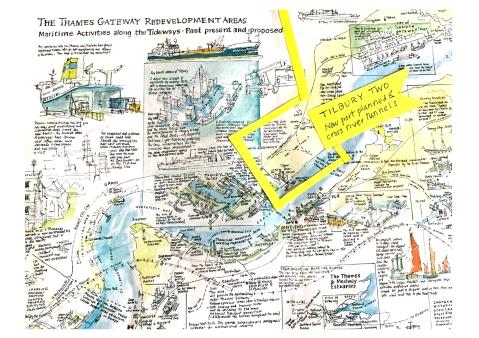